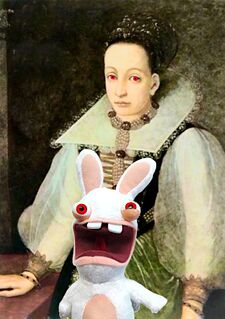 Legend has it that Elizabeth Bathory's spirit returns every twenty years in the form of a rabbit.

Elizabeth Bathory (Erzsébet Báthory, "Don't call me Liz") was a Hungarian countess who lived from 1560 to 1614.

She was a Hollywood star before there was any Hollywood. For starters, she allegedly bathed in the blood of virgin women in order to stay young. This was over 400 years before Gwyneth Paltrow was telling women to do the very same thing. She would go totally ballistic on her servants but managed to cover it up until she was outed late in her life. she started a black metal band, Bathory, that played giant lutes instead of electric guitars. It exists to this day though with many personnel changes. She has been an icon to that entire genre for her bizarre and bloodthirsty behavior, again perfectly standard for the Hollywood icons of today and the recent past. Zsa Zsa Gabor and Tom Cruise, we're looking at you.

Bathory reportedly tortured and murdered over 650 young women, mostly hired as servants. This shows that you couldn't get good help way back then, either. So much so that other nobles were finding it difficult to get female servants that they could torture and kill themselves. An investigator was sent and made up all kinds of good stuff and fed it to the tabloids of the time including the influential Budapest Midnight Enquirer. She was found guilty as she calmly munched on a large drumstick of unknown origin. As she was a noble and above normal laws, she was given the worst punishment possible, three strikes of a wooden ruler on her left hand, administered by a 98-year-old nun.