Elephants are a type of mutant spiders that came from the sun. They like to have beer on a Friday night and often are often scene watching Star Wars episode VIIIIIIIIIIII: An Old Hope. 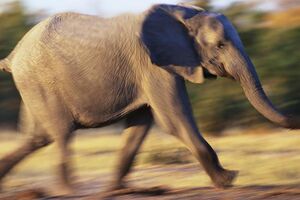 Elephant at rolloff speed and about to take flight.

Since elephants came from the Sun, it is quite obvious that they have the ability to fly. Since migration routes from the Kalahari and Serengeti are clogged with other animals making the same trip, it makes sense for elephants to fly instead of walk. They will eat great quantities of leaves and grasses and will produce and hold in the gas produced that makes them so buoyant. They will use roads as runways and take off singly or in groups, joining up in the sky into their familiar "V" formations. Thus, unlike Dumbo, they do not use their wings to fly but do use them as control surfaces to go in the right direction. Controlled release of gas allows some further steering and eventual landing at the desired locale.

As giant balloons, elephants do not fly very quickly and can be at the mercy of storms and high winds. It is now known that Hannibal did not invade Rome with elephants, but that they were concidentally blown off course by strong winds at the time of Hannibal's invasion.

This is contrast with Indian elephants, who much prefer to travel by train. 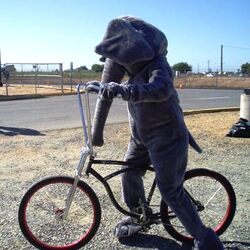 When elephants reach their equivalent of the early teen years in humans, they separate from the main herd into a separate group. There, being unsupervised, they turn to antisocial behavior. Smoking, drinking, twerking, taking the Tide Pod challenge are among the current activities being noted in elephant youth, meaning that young elephants are slightly behind the curve compared to human kids.

Riding stolen and reinforced bicycles, large groups of young elephants will terrorize human villages and small towns by blocking roads while drinking and partying. Thefts of bicycle horns and reflectors have been recorded. Biologists have termed this activity "hanging out". The pachyderms will continue this until as late as 10 PM, then disappear as quickly as they had arrived. They will then go to remote areas to continue partying while drag racing their bicycles. This continues until perhaps an irritated honey badger comes along to chase them away.

These events have been recorded and posted on YouTube. However most have been taken down not for content but due to their poor quality, as elephants don't know anything about lighting scenes shot in the dark.

Hell, yeah. Didn't you see Mythbusters where Adam Savage dressed up as a mouse?