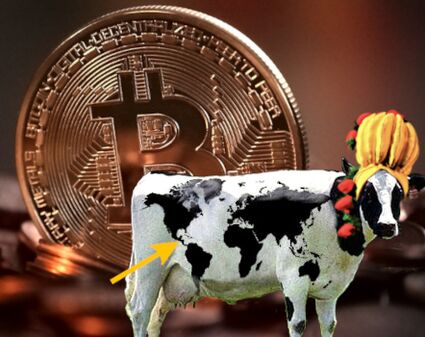 El Salvador is a place in Central America where nobody trusts the local money.

Instead, Salvadorans trust only US currency. The joke's on them since people in the US don't trust US dollars. In any case, Salvadorans especially like US dollars made by counterfeiters in Peru and Iran for being so clean and crisp.

Enter Presidente Nayib Bukele, described as half wannabe dictator and half Elon Musk. While this may be a scary thing, realize that he was probably handpicked by the country's oligarchs during a drunken cocktail party. Anyway, Bukele was surfing the net one day and saw something about BitCoin. Right then and there, he decided that El Salvador needed it for its new national currency. Come to think of it, he apparently likes roller coasters, too.

Its rollout was underwhelming since the initial cash machines used didn't work so great. Neither did the cardboard boxes with a slot cut in them and monkeys inside used to replace them. It had a $US30 signup bonus that people just took and never used BitCoin again. Hellooo! A bonus in US dollars and not BitCoin? And because fake IDs were accepted, people could go back again and again for a bonus bonus. It probably also happened when BitCoin did one of its many tank jobs. Yet Bukele put tons of government cash into BitCoin.

To prove his commitment to BitCoin and maybe to the loony bin, El Presidente has now proposed building BitCoin City for mining BitCoin, which would be powered by thermal energy from a volcano. No lie here. He wants to float a bond issue for it worth a billion dollars, half of which would be used to buy (guess what) to generate the interest payments. Stop laughing, you.