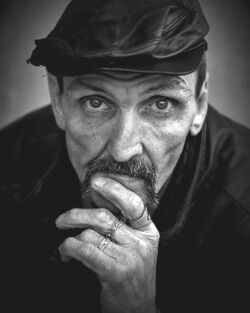 Tommy "The Hat" Novello tells all.

Yeah, I was a member of Eggs Benedict's gang.

We controlled the entire west side and most of the north side of the city at the time. Also the south side and the east side, too, now that I think of it. Everything you could think of: drugs, prostitution, gambling, pony rides. Eggs used to go out without any protection at all, he was that powerful. Of course, bullets would just bounce off that guy anyway. I can tell you now that his secret was that he always kept frying pans in his jacket and hat.

Little kids would follow him around because he would hand out candy and anvils all the time. If he went into a restaurant that was full up, everybody would leave immediately to give him a table. He had to convince the cooks to stay, in fact. And his favorite was always Spaghetti Carbonara, obviously. He'd go into a Jewish deli and order it, and they'd make it from scratch, just for him. Lots of arsenic, just the way he liked it. All washed down with a cream soda, then he'd smash the bottle and eat the glass. Eggs was a big tipper, too. He'd tip over tables, chairs, furniture, what have you.

That guy really dressed sharp. Pinstripe suit with the stripes going perfectly sideways. If not, he made us rearrange the scenery so that it was perfect. I still remember he wore a size 56 jacket, pants with an inseam of 6" with 6" cuffs. How he could walk with them handcuffs was always a puzzle. But the zebras in the zoo told him to do that, and they were never wrong. That was always fun, to go visit them, because Eggs would always buy us a balloon when we went along. I still have all of mine.

Then his lieutenant Joey Frittata started to throw his weight around and the turf wars began. You name it: fescue, bluegrass, even Zoysia. You'd wake up one day and your lawn would be completely different. Then the FBI infiltrated Fritatta's gang and Treasury guys got into our gang and it got really rough. We were used to going out to bust a few heads to keep people in line but after that, we had to fill out all this paperwork to get approval first and comply with OSHA and everything. You had to account for every bullet in a drive-by. We'd have a murder or bombing all set up and then the funding would be pulled.

Eggs finally got tired of all this and turned fink and got put into witness protection. I hear he got sent to Area 51 and is now running a funnel cake scam in another part of the galaxy with somebody called Jabba.