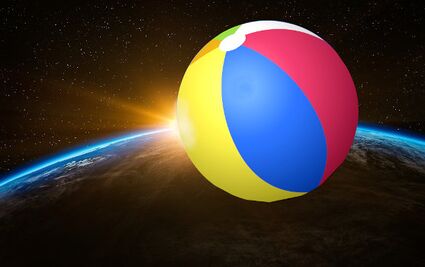 Russia had just launched their satellite Sputnik into Earth orbit. This in-your-face event was a deep embarrassment to the United States and its Nazis working in its space program. The response? Blow up a whole bunch of lameass rockets on the launchpad while otherwise being occupied on getting fully medieval on Vietnam's ass.

Fast forward to 1960. After making their Nazi scientists happy by accusing Jews being all Commies, 'Merca finally successfully launched their first satellite, Echo I. Every 'Mercan was proud that it was a) way bigger than Sputnik, b) actually usable for communication and c) didn't need no stinkin' antennae. However, all was not as it seemed.

Because Echo I was a lie. All it was was a giant balloon. It was folded up and partially inflated so that in the near vacuum high above the Earth, it would fill out. While some Nazis cried when their balloon escaped the atmosphere, they were consoled by the government that they would get another one. Plus ice cream later. And it was a communication satellite in that a signal could be bounced off of it so that Cape Canaveral could communicate with Miami Beach. BFD. Well, baby steps, maybe. Historically, it was the first use of the theme music used much later on the brain-melting Hamsterdance website.

What was never revealed until years later was that Echo I contained the first American animal sent into space. Russia had already sent the dog Laika into space in 1957, but got huge backlash for not returning her to Earth. It turned out that Echo I was actually a giant hamster ball that needed to be kept constantly rotating. So, it contained a giant mutant hamster that was found running around Tennessee. So, much later, the Hamsterdance site was created to memorialize the sacrifice of that valiant rodent.