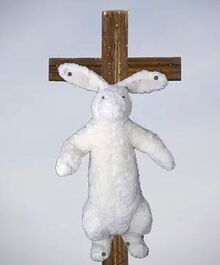 Don't blame me, blame the Romans.

The Easter Bunny is the central figure of a religion once widely practiced but now is only remembered for a very limited time by Christians and Jews who have leftover chocolate coins from Hannukah.

The cult of the Easter Bunny has two major components. First is the barbaric practice of eating the boiled unborn children of chickens. This is thought to stem from the times that chickens and rabbits were in open warfare with each other. The second is tooth decay, as a sacrament of the church is sugar and more sugar. The accompanying sugar high is thought to be part of the religious experience.

Like Christianity, Islam, and Judaism, the cult of the Easter Bunny rose in the Middle East. Its generous founder passed out decorated eggs and candy to the needy as he traveled the region in the spring. Though his numbers exceeded the loaves and fishes produced from Jesus's magic top hat, the latter event has been driven into the common memory by Christian churches. One would think that people who don't like fish would follow The Bunny, but any converts from the other religions were persecuted and killed, just for shits and giggles as usual. Infidels were tortured with celery sticks and raw kale before being put to a merciful death. Like Jesus, the Easter Bunny was crucified by the Romans, who didn't have any rabbits in their pantheon and were suspicious of Him. Plus, they figured He would be delicious with mashed potatoes on the side.

Follow the White Rabbit
Will the universe be changed one bit if you do? Probably not. The curious songs of blue whales? Maybe. But your reflection in the mirror? Oh, yes.
Retrieved from "https://wackypedia.risteq.net/w/index.php?title=Easter_Bunny&oldid=164884"
Categories: