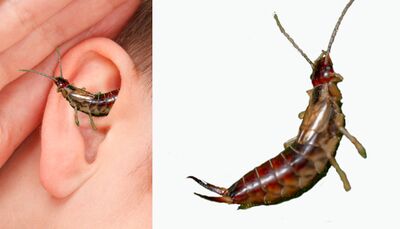 Earwig shown in its favorite hiding place (left); a complete earwig showing its buttpincers and for maximum gross-out. (right)

Earwigs are insects that like to crawl into your ear when you're not paying attention. Face it, that's most of the time for all of us. This is said to be a legend, but Intelligent design advocates all act like they have something wiggling around in their heads, so it's got to be earwigs. Or maybe moths.

They are recognizable by their large buttpincers, used to defend themselves from other critters sneaking up from behind and also used to hold earwig passports when going from brain to brain. Buttpincers come in handy because earwigs will trim those embarassing giant hairs growing out of your ear. Earwigs that have drilled through you brain will also trim your nose hairs for you. I mean, you can't rely on armadillos to do either job anymore nowadays, can you?

Earwigs eat all kinds of stuff including crud, especially earwax. When your ear is nice and clean they'll burrow further into your skull and will eat unused brain cells. Once again, there's plenty of those in all of us, too. But with your 7-second attention span caused by being on teh interwebz all the time, you won't miss... what were we talking about?

Earwigs form communities wherever they are found, so naturally they will produce eggs. Millions and millions of eggs. We are told that the little tiny larvae spend their time learning how to do complicated things while still in the egg. When they all hatch at the same time, they form a large marching band with pop music played on tubas and glockenspiels, waving flags and baton twirling when they leave your head. Sure, your head is all asploded, but you'd be really entertained if you were still alive to see it.