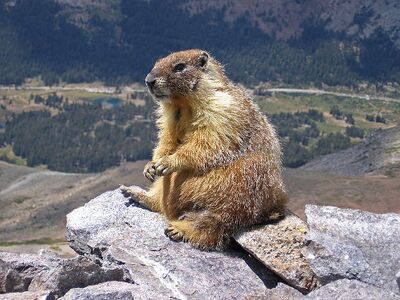 Hi! Melissa Marmot here to tell all you kids about eagles. You probably know that the Bald eagle is the symbol of the United States. And eagles look really majestic gliding on mountains updrafts. They do this to look for prey, animals to eat. That would be me.

Anyway, most eagles are really big. I'm not saying that just because I'm a marmot. If you see them up close even you humans will say they're big. Their wingspan can be 7 to 8 ft (2.1 to 2.4 m) long. So, they're not quite in the class of Mothman or King Ghidora but equally scary. And you should be scared, because they are powerful animals. Plus they're a bunch of killers. Of marmots, anyway.

And just what is this thing about the heroic giant eagles in Lord of the Rings anyway? They were never around when it mattered, just waiting until the last minute to help those shrimpy little guys which the eagles should have just eaten. I thought the eagles were just waiting around for BBQ, but nope, they rescued those Hobbits. Go figure.

Whoa! I can see my house from here!