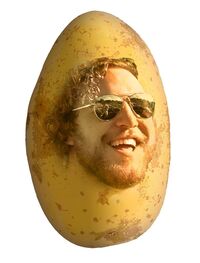 A dude is an ordinary ude, but slightly more dy. In other words, the uditude or atitude, of a dude, is directly proportional to the eeblness of a sonk, and should not be attempted by Phlagocytes. If you have attempted uding a dude, youditude, should contact a local Ngthite control center.

There is such a thing as a Dudette, but usually they are far more intelligent, cool, and attractive than a dude.

The natural habitat for a dude is in the basement of one of his friends, getting higher than a kite, and eating hot pockets.

There have been many movies made about the misadventures of a dude such as "Dude, we got SARS" and "Spider dude 2".