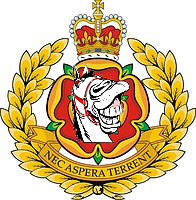 The posthumous unit badge of the 33rd Marchmont Hussars. The inscription is a Latin translation.

Doo-wappa-doo was the battle cry of the 33rd Marchmont Hussars, the 'King's Own', a British cavalry unit.

The official unit history kept at the Royal War Museum records that the phrase was coined on 12 October 1805. Junior officers were at breakfast mess that morning when one of them misunderstood what was being discussed and asked what 'Doo-wappa-doo' meant. This resulted in gales of laughter, with the phrase repeated back and forth as if the officers were parrots or wiki editors. The commotion was noticed by one of the senior officers who, despite being typically stodgy, managed to raise a chuckle upon hearing the phrase.

Soon the rest of the encampment heard about 'Doo-wappa-doo' and were laughing loudly whenever it was uttered. When unit commander General George Bentley OBE became aware of the uproar, one of the senior staff members explained what was going on. Gen. Bentley, with a reputation as a humourless man, mumbled something to the effect that 'Doo-wappa-doo' was an interesting phrase. Senior officers were shocked as they had never heard him make a joke, ever. Eventually, the hussars settled down and things returned to normal.

Then on 2 December, the 33rd Marchmont Hussars were given the task of attacking the weakened right flank of the French army. They were staged and ready to charge from high on a bluff overlooking the battlefield of what would become known as the Battle of Austerlitz. Gen. Bentley made his usual pre-battle speech before the unit, ending by raising his sword and intoning 'For King and country! DOO-WAPPA-DOO!!!' At this, all officers present began laughing so hard that most of them fell from their horses. Their uncontrolled laughter caused them to roll on the ground and eventually roll down the hillside to be captured. A confused Gen. Bentley was knocked off his horse and also rolled down the hill to be taken prisoner. The attack failed and the battle was lost. With the loss of its officer corps, the 33rd was disbanded.

Today, the cavalry unit is memorialised every 2 December with a minute of silence, the sounding of Last Post by a lone bugler, followed by His Highness Prince Harold shouting 'Doo-wappa-doo'. The observance has only been held recently, as Her Majesty the Queen quite sensibly refuses to get involved.