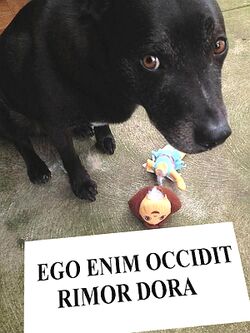 Latin appears to the most effective language to use in pet shaming.

Dog shaming is an attempt to keep out-of-control pets in line. It consists of making the animal write a confessional sign and photographing it with the dog wearing the sign or sitting by it. In extreme cases, dogs are forced to tweet the image or put it up on their Facebook pages.

It was started as a joke but has become a standard method of discipline for pets today by idiot former English and art majors that can help dogs make the signs and correct their spelling and grammar. Somehow it has been thought that dogs are either Catholic or Jewish and therefore believe in the concept of guilt. Dog shaming has been deemed ineffective by Dog Whisperer Felix Millan because the method is not weird enough.

Misguided humans have tried shaming on wild dogs like Australian dingos. That was an attempt to keep them from attacking and killing sheep. After hanging confessional signs around the necks of several dingos that were never proven to have killed sheep, the wrongly accused dingos went all Ned Kelly. In revenge, they became major outlaws, robbing banks and murdering local officials in cooperation with drop bears. Further, cat shaming has proved to be totally ineffective since cats can read and always make sure to smile when the photo is taken.