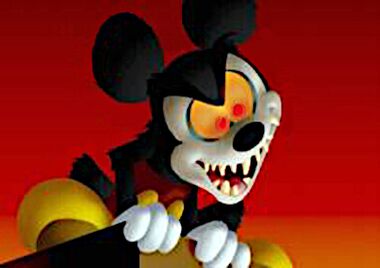 Every once in a while, Mickey goes off his meds. His ravening hordes of lawyers are not shown – too scary.

If you doubt that, go and try and think of something that doesn't belong to Disney. That? They just bought that a week ago. That? They stole that a long time ago and nobody squawked so it's theirs now under interlocking patents and legal stuff. That? Disney owns 51% of that so technically, it belongs to them.

Now take Japan and its pop culture. Well, you can't, since Disney bought Japan. Yup, all of it. So we move on to Canada and... just ice hockey, maple syrup and poutine there. If you've been to any Disneyland, you know that Disney doesn't know about or care about food, so Canada is mostly safe. Curiously, Disney does control all the snow there, so all the good snowmen are theirs, if you didn't know that already.

Disney also has every racist stereotype under their wing. Yes, they paid off the Klan and neoNazis, and even SJWs are keeping their mouths shut because they want to be Disney Princesses like the aforementioned groups. Disney even controls the concept of sequels, getting a hefty cut of the profit from any non-Disney movie so they can just buy it later.

It is also strongly suspected that Disney has all the rights to the Apocalypse. So, let's hope that the rumor that Disney has sold the Earth to beings from Rigel 4 is true.

If Disney lets you, see[edit]