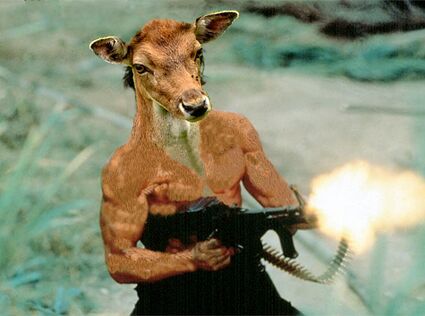 Deer Woman now uses modern methods to get her point across.

Deer Woman is a familiar figure to Native Americans throughout North America. City Indians refer to her as "Deer Abby".

Deer Woman is a spirit who will appear as a deer, a human woman or a combination of both. Therefore, she can be confused with Furries running around loose, although she does not manifest the large googly eyes or fluorescent colors of the latter. She is still seen today in Indian casino parking lots, mobile home parks and The Rez by people of many nations. However, people that are half Indian will only see half of Deer Woman and so forth.