This is a diary that was found some time ago. It was written by a suspected vampire. The man was promptly arrested under five charges of DUI and was found dead in his jail cell later. These are entries from his lovable diary.

I haven't really come up with a name for you yet, maybe something outrageous like "diary". Or "dairy". But I think I would like to stick with something more simple like "Toster oven winged dragon beer" or "Kyle". By my next entry you should have a name. Anyhow, I was at school today and I looked in the mirror and uh-oh-spaggettios! It looks like I have fangs. Night.

How do you like the name? I think it is soo cute. So does my girlfriend. And speaking of girlfriend, blood tastes strangely good all of a sudden. I tried eating raw cow because Jerry dared me, and I ended up slurping up all of the blood. Weird.

I'm sorry I couldn't get to you the last couple of days. I've been to busy drinking my pet cat's blood. Boy, I wish they had blood flavored drinks. That is my fantasy. Oh yeah, my fangs make me look like a vampire.

Anyhow, my girlfriend died becausee I bit her neck. People say I look like Count Chocolate or something. Whatever. Still, A killed another cow today. There blood is the best. Night.

I think I am a vampire. The police are after me, My shoes are black and shiny, and I have a cool cape. I have bit like, the everyone in the school's necks. I love blood. And now I like to say "I will suck your blood!" and scare all of the 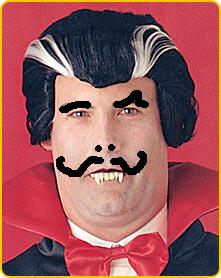 kindergardeners. And then I suck their blood. I am no liar.

I don't think I will go to school tommorow because there is a being bit in the neck epidemic. Maybe I should bite my mom's neck, because I can't go a day without it. Night.

Well, it turns out I am a vampire. I went to the doctors today, and since I was biting everyone they used beaver tranquilizers on me so they could test. When I was awake, I was on the sidewlk outside with a note that read:

So i guess I am a threat to society eh? It's a cool feeling. Wait. Holy shit! The cops broke in. I'll hide you under my bed.