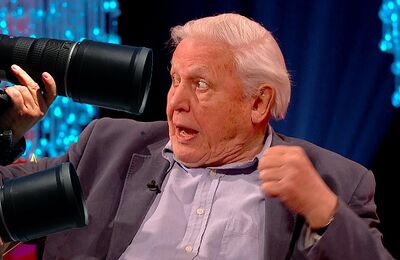 David Attenborough caught out of his lair, reacts after deftly spotting our cameras and will quickly dig a hole to escape prying eyes.

We are on the hunt in England for the wily and elusive David Attenborough. Reported sightings at asda and other high street establishments have proved fruitless to date. However, a tip by local natives speaking in an odd tongue have led us to his den.

The Attenborough is easily spooked, so long lenses must be used to capture his doings as well as secret microphones. And there he is, making a cup of tea. The wild Attenborough seem to favor Earl Grey as do most of his species. There, he is carefully pouring the tea and for the first time ever recorded, he is adding whiskey. It looks to be a rotgut brand, Old Persnickety, known for its smokey flavor because of bits of charcoal still floating in it. It looks like he's spotted our cameras and is using the well-known shaking of the fist motion as a threat display. He has moved out of the kitchen and is likely headed for the bathroom, where our other hidden camera can pick him up.

For those without comedic tastes, the so-called experts at Wikipedia think they have an article about David Attenborough, or simply go here.
Retrieved from "https://wackypedia.risteq.net/w/index.php?title=David_Attenborough&oldid=142934"
Categories: