From Wackypedia
(Redirected from Dark Lord)
Jump to: navigation, search 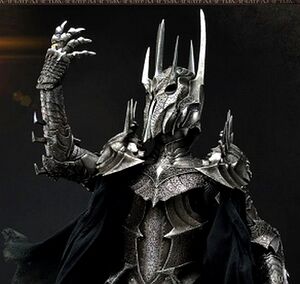 Sauron was a jeweler and MMA fighter based in Mordor, also know as Beverly Hills, California.

He handed out cheap gold-plated rings as a promotion when he opened his first mall store. Humans immediately fell under his influence and salesmanship skills and became totally corrupted, always buying his lightweight and poorly made jewelry said to come from the vending machines of Barad-dûr. The elves were resistant to his pitches and special offers save one Elvish Presley, who loved bling. The dwarves were too far underground to get his mass mailings, but themselves became obsessed by the endless cycle of digging for gold and consuming energy drinks

As an MMA fighter, he always presented an impressive sight in the armor that he was somehow allowed to wear during his matches. His lifetime record was 2-2, losing his last match to Rebecca of Donnybrook Farm and retiring thereafter.

For the religious among us who choose to believe lies, the so-called experts at Wikipedia have an article about Sauron, or simply go here.
Retrieved from "https://wackypedia.risteq.net/w/index.php?title=Sauron&oldid=142349"
Categories: