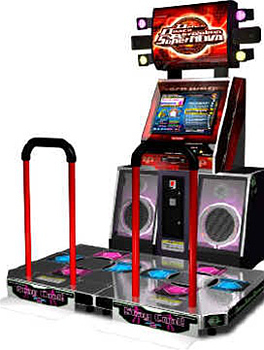 Machines identical to ones used to torture prisoners at Guantanamo are now found in arcades around the world.

In it, one or two players soullessly dance to soulless music. The game also rewards perfect mindless accuracy with the highest scores, so the game is perfect for kids in the world of today. They are assisted by a safety bar behind their back onto which they hang on in order to get more speed in their footwork, just like real dancing.

In America, the game is almost entirely played by scrawny Asian-American kids, including Indo-Americans and Iranian Persian Americans. Very few white Americans dare to embarrass themselves by playing it and many African Americans also ignore it to pursue other stereotypes. Instead, both of the latter lurk outside arcades because they know who has all the quarters to play Dance Dance Revolution. Very few fat kids are seen on the machine as it is the perfect high-intensity aerobic workout and anyone playing will soon reduce themselves to skin and bones, if not melt down into a puddle of goo. Luckily, the arcade machines are easily cleaned.

Some rebellious kids have adopted a freestyle technique giving up high scores for showmanship. The home versions thankfully also have more than the eight songs always being played on Dance Dance Revolution arcade games and players will even add their own music. Americans will be relieved to know that those players have been reported to their parents and to Homeland Security so they can deported for the sake of bland uniformity and for the Nanny State to prevent accidents. Doubleplusgood.

The television show Dance Dance Revolution With the Stars never made it to release since no adult stars had the speed or coordination to get any kind of score on even the slowest song available, in spite of their typically heavy drug consumption.