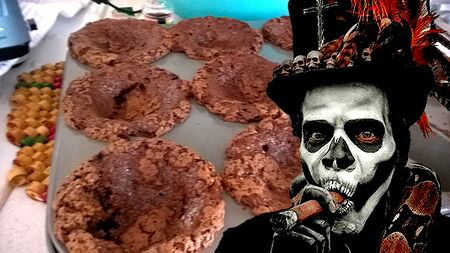 Even voodoo cannot bring back bad cupcakes from the dead.

A cupcake is something that is like a miniature cake. They are called fairy cakes in the UK, so you have to wonder if they are just using baked goods to run down gays or the mythical beings of the forest.

If you thought the cake is a lie, a cupcake is more so. If you thought having something smaller would keep you from scarfing a whole cake, think again. Cupcakes deliberately come in packages of six or more just so you can immediately scarf them down one by one instead of wasting time looking for a knife. Be sure to chew well to be able to digest any plastic clown heads or other decorations that may be on top.

The real reason for eating cupcakes is actually to eat frosting, with over 600% more frosting being present than on a cake. The cake part of a cupcake then is really just there to give you a handle to slurp up frosting. Just be sure to inhale every once in while.

But cupcakes can be used for evil purposes by the gangster slaves of Martha Stewart. They will add fancy ribbons, decorative crap, with exotic flavors of frosting and cake all done up in a perfect frosting swirl. Naturally, being a peasant, you will never be allowed to eat one of those. Plus you will be none the wiser as these are really made by magical Chinese gnomes in forced labor camps.