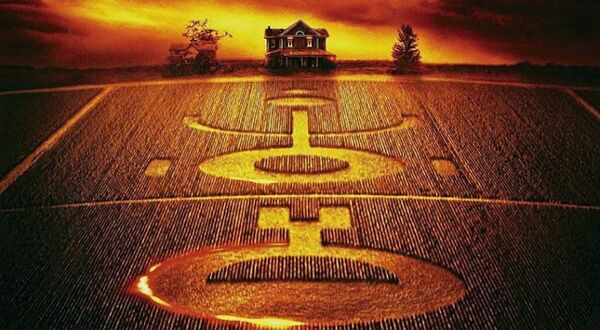 What kind of stubby crops are these? Was it a bad year and the aliens are just rubbing it in? What? Doctors' waiting room carpet? That's a crop? Really? Thank you. I was not aware.

Crop circles are mysterious circular patterns that have appeared in grain fields around the world.

Often appearing overnight, these complex patterns have been attributed to the only logical culprits: aliens. Why they would bother with this is a mystery, since there's Twitter and Facebook to communicate with humans and tons of emojis to use if they don't know no good English. Maybe they're just artsy fartsy types.

Others contend that dust devils or whirlwinds cause crop circles. But those have become increasingly complex over the years, and the Tasmanian devils that are the cause of whirlwinds are always pretty sloppy characters while crop circles are very neatly done and quite fancy.

The other theory is that people are making them. Those guys are saying they just walk in, and use string to lay out circles and wooden boards to moosh down plants into interesting patterns. But EVERYONE just falls asleep after the late news or is hanging out in bars and passing out there, so no humans could possibly be making these patterns in the dead of night. And the people coming forward look normal and are dressed normally, so they can't possibly be weirdo artist types.

But now, with high-speed night vision cameras, the real reason for crop circles is now known. And that is bees. Not just regular honeybees, but killer bees. As they have spread across the world, so have crop circles. But even killer bees are small critters, so how could they knock down just one or two maize corn plants much less hundreds? Well, it turns out they have help. And that is in the form of Agent Smith from the Matrix. He is a rogue program, just fancy talk for being a free agent. So a single killer bee hive mind was able to reach into the Matrix and contact him, and was able to get him to work with them/it. As hundreds of Agent Smiths can manifest themselves with no problem, elaborate crop circles could be made in less than twenty minutes. It would be even faster if the Agent Smiths would just take off their sunglasses. Agent Smith was then sent to other farms to assist other killer bee hives.

But what do these patterns mean? Note that they are pretty much unique to each farm and each region. It has now reported by reliable bee sources that crop circles are gang signs for individual killer bee hives. As killer bee hives spread across the world, they picked up on gang signs or tags on inner city walls and fences. Apparently they liked the idea and adopted them for their own use. While entomologists have contacted gang crime units from many cities, there are very few bee language experts there that can even try to interpret crop circles.