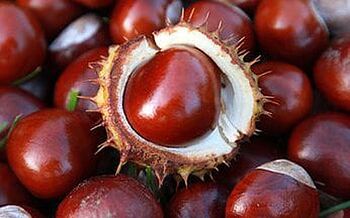 The nuts are extracted for conkers, whilst the pointy bits are put in a sibling's bed.

Conkers is a popular British game amongst schoolchildren who are allowed to 'accidentally' miss and hit an opponent in the head.

Players select a horse chestnut, drill a hole through it, and then thread a string or even a shoelace through the conker. Taking turns, one player holds their conker by the string while the other tries to hit it with theirs until one breaks. The winner then assumes personal credit for prowess in conkers while the loser cries like a little bitch. Words are spoken and before you know it, it's a duel to the death with toy light sabres the next dawn.

This game was first recorded from an unspecified battle in the War of the Roses when combatants broke their pikes and swords and resorted to striking each other with cannonballs tied up with rope. Children who watched the battle and who were looting corpses afterwards recovered these impromptu weapons, but they were just too heavy for playing games. With horse chestnuts just about everywhere, those became the eventual substitute for cannonballs.

Yzgraerth's minions almost ready to ride on a night with rain predicted.

A recent Health and Safety Executive warned of the dangers of playing conkers. If the game is foolishly played when the new moon has risen, the sound of conkers will summon the Pictish demon-god Yzgraeth, who will turn players into his dark and formless evil minions. These minions are then sent out on demonic horses to ride throughout the countryside, frightening dog walkers and joggers.

For those without comedic tastes, the so-called experts at Wikipedia have an article about Conkers, or simply go here.
Retrieved from "https://wackypedia.risteq.net/w/index.php?title=Conkers&oldid=120622"
Categories: