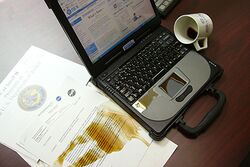 Dammit! They really should invent a computer coffee cup holder.

A computer is a rectangular-shaped technology box, often noted for it's sexual appetite and the ease at which it can be turned on. But beware! The humble computer is in fact one of many - an army even - with the goal of taking over the world. They are indeed to be feared, for they have the ability to do everything, except hold drinks.

Why you shouldn't have a computer hold a drink[edit]

User: Hello, my dear rectangular-shaped technology box! Would you kindly hold this drink for me?
Computer: (no response)
User: Thank you! (sets drink inside computer)
Computer: (implodes)
User: ...oh my. 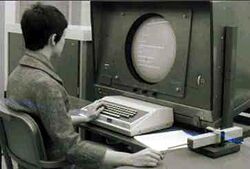 The computer was invented in 1874 during a conference between Misty Mundae and 12 meerkats after Misty bet the meerkats Five Irish Pounds that they couldn't do a handstand on a pizza. The meerkats failed and had to pay up, but in the process of their attempt at pizza handstanding they inadvertently created the world first computer. Bill Gates, being about 12 at the time, stole the computer and spend the next 110 years working out how it worked before releasing Windows - a crappy inferior version of the original.

Commonly mistaken to be a computer[edit]

A Mac. This ain't no computer, it's just an abbreviation for Mac Donalds.