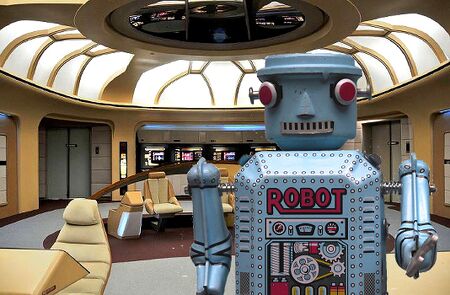 Commander Data is the star of Star Trek: Pinocchio in Space. He is an android, meaning he is incompatible with iPhones.

Per the character whose name is whispered behind Data's back, Data constantly wishes to be human or at least humanoid. This is depite the fact that he is surrounded daily by a bunch of sociopaths and know-it-alls on the bridge of the USS Enterprise. A little self-analysis would have shown that if he were a normal human, he would have turned Captain Picard into a pretzel long ago. This is the captain who thinks Data is his seamstress, constantly ordering him to "make it sew".

Off duty, Data is in demand for the nightly orgies since "he can love you long time". Even so, he would rather be human so he could get his rocks off. Plus, in his efforts to make friends with humans, he has shown them all his secret on-off switch. Therefore, he has often returned to consciousness with makeup on and various things stuck up his hooha, with images of that always shown on every viewscreen. While Data knows of the concept of revenge, since he is an android, he will not be able to taste the sweetness of payback unless he becomes human.