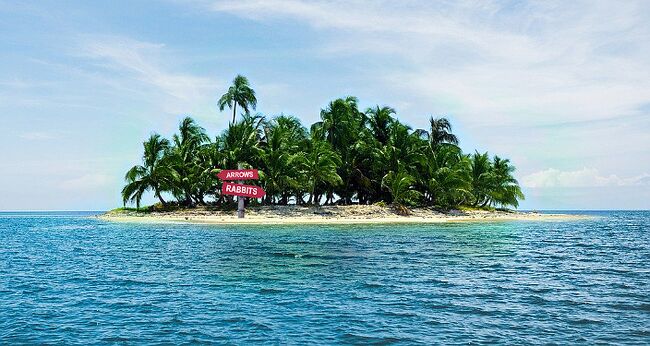 Coconuts wait in the trees to attack at a moment's notice.

A coconut is a semi-intelligent creature with the ability to predict the future.

Many people think that the coconut palm makes nuts/seeds that are called coconuts when actually, it is the other way around. With the willing assistance of crabs that don't have much to do, a coconut in its protective husk is carried high into any nearby tree. When two or three coconuts are attached at the top of a tree, their tendrils extend into the tree, eventually changing it into a coconut palm. There, a coconut will watch and wait hidden among the leaves for an unsuspecting victim to walk below the tree and will drop on it to kill it. The bounty will then be shared with its crab assistants. Coconuts will also attack large fish and whales that stray too close to shore. With this efficient and patient means of attack, it is no wonder that Pacific islands are so sparsely populated with anything except coconuts and crabs.

Scientists note the early arrival of coconuts in Central America, theorizing this was due to trading between Pacific islanders and South Americans. but in stories handed down from coconut to coconut, a coconut shaman predicted that Columbus and other Europeans intent on enslaving Americans would be landing in the Americas in several hundred years. As coconuts were and are anti-slavery fanatics, they then swam furiously to the Americas, as best as coconuts could swim. They arranged with the local crabs to take over local trees and waited. Within a few years, Columbus, as predicted, landed on a beach populated by coconut palms.

As Columbus advanced toward a native group with handcuffs hidden behind his back, nearby coconuts struck. However, a stiff breeze came up just then and blew the coconuts off course. Instead of hitting Columbus in the head, they fell harmlessly around of him. The curious explorer then grabbed the two nearest and held them up to his chest, getting a big laugh from the natives who thought he was making a joke. An angered Columbus then had the natives captured and coconuts were chained to their ankles. This practice eventually evolving into the ball and chain used by Arizona sheriffs and bondage fans today.