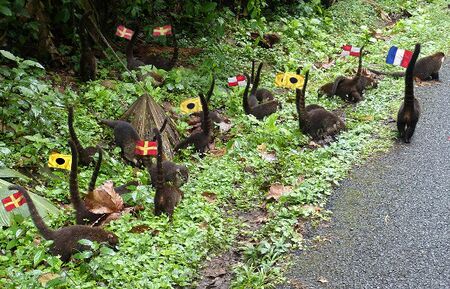 Coatis used their tails to signal to each other. Their meaning is unknown but these animals may be fans on their way to a football game.

Coatimundis or coatis are vaguely raccoon-like vague animals with vaguely long tails that are found from the US Southwest to Central America. But vaguely.

The animals have long slinky tails with a poisonous barb at the end so that they can hunt cooperatively with stingrays and scorpions. So this confuses scientists who figure that they should really be Australian creatures. The tails are also used to signal to each other. So far, human scientists have been unable to interpret those signals except for the common phrase used by all animals, FOAD.

Coatis are seldom seen even in the areas where they live. This is because they are invisible nearly all the time except once a week on Coati Mondays. While they are visible, they are seen just rooting around for things to eat, but they're not fooling anybody. For as we all know, when they are invisible, they are responsible for all kinds of pranks and even sabotage. All you have to do is see the innocent look on their faces on Coati Mondays and you just know they are guilty of something.

For those without comedic tastes, the so-called experts at Wikipedia have an article about Coati Monday, Tuesday, Wednesday, Thursday, Friday, Saturday – what have I done?, or simply go here.

Have you every tripped over something on the sidewalk and looked back and there was nothing there? If it's not Monday, it almost certainly was a coati. Boeing contends the grounding of the 727 Max-8 jet was due to sabotage from coatis. Sabotage of the Iranian nuclear program was due to coatis getting into their computers and not the US or Israel, according to the latter nations. The invasion of Crimea was not done by little green men but by coatis, though it is unclear exactly how they managed that long distance. It just proves how devious these animals are. This is why we all need chinstraps on our tinfoil hats so that coatis can't them knock off.