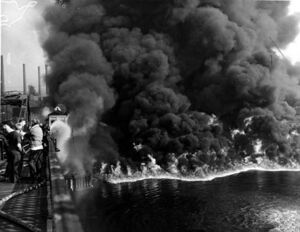 Cleveland is known to many as "The Mistake on the Lake", "The Misery Capital of the Nation", "The City without a Super Bowl", "The City where the Lake catches on Fire", "Where It's Always Next Year", or all of the above.

In 1796, Moses and his Brother-in-Law Cleveland settled in what would be called Cleveland by a coin-toss. It would flourish so much that the streets were paved with gold and by 1950...it was the 6th City with one hell of a Baseball and Football team!

In 1969, the river caught on fire and all the fish got AIDS!

In 1977, the new mayor Dennis Kucinich put the city into default, causing him to catch fire and he too jumped in the river and the river caught on fire!

In 1996, the Bicentennial occured and Art Modell sold all the gold-paved streets as well as moved the Cleveland Browns to Baltimore...and he set the river on fire!

In 2010, LeBron James had a one hour interview on ESPN on going to Miami and would set the river on fire before he does.

Cleveland today now has Drew Carey trying to pick up the pieces of the 41st City with the Viral Tourist Videos on YouTube.

And as for LeBron James...he made a decision on July that he would leave for Miami because he was sick of seeing a river on fire. And he also set the Cyuahoga River on fire...again!

Bertstown...a city with the same past!