Chuck Norris is a reptile. He keeps green paint with him at all times.

"In some alternate universe where Chuck Norris had to fight himself:

Chuck Norris (1940-) is the most powerful human on the face of the universe. He is also the alien over-lord, along with being the most intelligent being in the universe. In recent years, led a widespread campaign of illogic throughout the internet, as well as some movies television channels that douts Mr. Norris as superhuman. Scientists have theorized that Mr. Norris' sudden popularity is being used as a tool to further the Ryperian/Norrisist agenda. He WILL run and WIN in the 2012 Presidential Election to destroy Gary Coleman.

It has been Proven by science that Chuck is a superbeing creature!![edit] 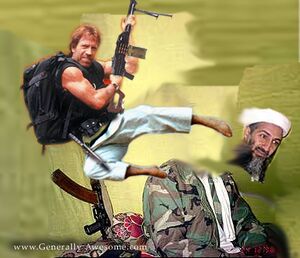 Here is the reason we can't find Bin Laden. He was already killed and eaten by Chuck Norris.

When Chuck Norris created The Zohan in 1337, he expected him to be the perfect slave, but Zohan revolted against him because Chuck made him look like Michael Jackson, and tried to become more powerful and overthrow Chuck. The Zohan forgot it was impossible to overthrow Chuck Norris, and Norris battled his way through The Zohan's heavily armed Isreali guards, ate his venomous man-eating lions, deflected The Zohan's evil bush with his beard, and killed him.

The Ultimate Showdown of Ultimate Destiny[edit]

When the Ultimate Showdown broke out in 9001 BC, Chuck Norris was quick to join in. He delivered a kick that could shatter bones into the crotch of Indiana Jones. Then he crushed Batman's head. Then, a large group of people, ([[Ryperian Party|Gandalf the Grey, Gandalf the White, Monty Python and the Holy Grail's Black Knight, Benito Mussolini, the Blue Meanie, Cowboy Curtis, Jambi the Genie, Robocop, Terminator, Captain Kirk, Darth Vader, Lo Pan, Superman, every single Power Ranger, Bill S. Preston, Theodore Logan, Spock, The Rock, Doc Ock, and Hulk Hogan.]]) came out of nowhere lightning fast and attempted to kick Chuck in his cowboy arse, but he defeated all of them, and he later joined forces with them to form the Ryperian Party, who defeated Mister Rodgers, the champion of the Ultimate Showdown.

A few years ago, the evil Microsoft Corporation invented the X-Box 360. Microsoft made a game where you can kill Chuck Norris and also, Chuck realized that the 360 sucked worse than Sonic. He thought it over with himself and realized that it would be completely EPIC if there was a black version of a 360 because hey, once you go black you never go back and he invented the PS3. Recent battles between Halo ODST and God of War 3 we have been believing that God of War has beaten Halo. The people don't realize that Microsoft's "Live" is more like "Dead" when compared to PSN, because PSN is ran by the fist in Norris's beard and Live is ran by Bill Gates's small dick. Eventually, Microsoft decided that Chuckie (known to his friends) was correct and the PlayStation 3 was 1000x better than anything that Microsoft has ever dreamed of. When Microsoft asked to buy the PS3 for $563,000,000,000,000 (not including shipping and handling) Chuck Norris was offended and killed everyone at Microsoft. Then the went to Sony in Japan, because he has a peace treaty with North Korea, he decided to let Sony buy it if someone sucked his 39 and a half foot dick and succeeded... well someone did and THAT is why Sony now owns the awesome PS3 and the 360 is going to shit.

Chuck Norris and Naruto were playing NASCAR 06: Total Team Control on XBOX Live when Benson came on the server. Chuck Norris was driving as Dale Earnhardt Jr, and Naruto was driving as Tony Stewart. Benson was driving as a fictional car, but still managed to somehow whoop them both. Since Chuck cannot be defeated natrually, Benson must have used a hack. When Chuck arrived at the Bensoncave, Chuck found out Benson didn't even own NASCAR 06. It wasn't Benson that was playing, but it was actually his old former ally and current arch-enemy Hitler. Chuck managed to start World War 3 against Hitler's zombie nazi army. Chuck Norris defeated Hitler's army and went into Ultimate Showdown mode with Hitler. Chuck pwn3d him in 1 hit. Hitler ran off crying for his mommy (who is Paris Hilton), but nobody, even Hilton, loves Hitler, so Hitler became emo and fed himself to Chuck Norris. The end.

Chuck Norris and DragonForce joined up to create the most powerful militia in the world, the NorrisForce. The NorrisForce became the coolest thing in the world. Then, Norris and the NorrisForce had to battle Big Boss for control over the galaxy. it was a long, hard , bloody battle that became known as the Norris War of 1337, but Norris came out on top. Their first act as dictators of the universe was to make it illegal for people to Soulja Boy, the Backstreet Boys , Britney Spears, Hannah Montana, or Lady Gaga. The penalty for listening to any of these awful musicians is an immediate pwning by Chuck Norris, Big Boss or Herman Li. They pawned 346438746543786 people in the first day alone. Chuck Norris also plays "Through the Fire and the Flames" in his spare time, on a triangle, with one hand tied behind his back.

Total number of doubts Chuck Norris is placing inside your soul every minute:[edit]

Chuck Norris blows up the moon[edit]

No, he didn't roundhouse kick it, you silly. He teamed a bunch of Russians, and advised them to explode the moon. They were like "wtf", and Chuck said, "Yes. Blow up the moon." And they said, "OK".

Why only Patrick Stewart is better[edit]

Patrick Stewart's baldness and divinity knows no bounds. It is even more infinite then Chuck Norris' roundhouse kicks.

People who can beat Chuck Norris[edit] 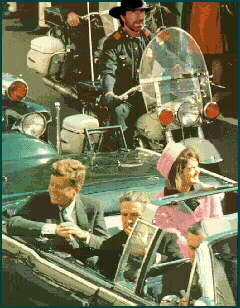 Lee Harvey Oswald never shot JFK...but Chuck Norris was the last person seen with both before they died.

People who THINK they CAN beat Chuck Norris[edit]