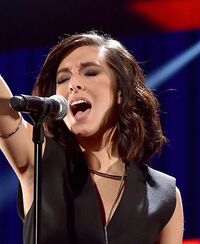 Despite her dramatic rendition of Row, Row, Row Your Boat, judges on the The Voice awarded top prize to someone else, because they're all idiots.

Singer-songwriter Christina Grimmie gained fame via her YouTube channel. Like many other performers, she started out performing cover versions of well-known songs. She eventually released an EP and full album as it proved too tiring to go door to door taking requests.

She appeared on TV's The Voice but lost to someone singing Bohemian Rhapsody in a Donald Duck voice. However, she was able to do the deal with the Devil and sign with a major label, who then dropped here, being demonic, after all.

In 2016, while performing in Orlando, Florida, she was murdered by your standard obsessed wackadola fan because why again? The venue security was tight, preventing outside food and drink from being brought in but had no standard metal detectors nor patdowns. But this is Florida, of course and such measures hinder drug dealers from working inside the venue. Grimmie thus missed joining the 27 Club by a lot, although her murderer was 27.

She now became tremendously famous, with the usual bunch of ghouls coming out of the woodwork. The president of YouTube promised that Grimmie's channel would continue, with YouTube keeping the profits so that they could buy some really good meals for themselves in her memory. Everything that she had ever recorded and was once rejected was now released, with Testing, one, two, three, four being a favorite from her 18 CD retrospective album.

For those without comedic tastes, the so-called experts at Wikipedia have an article about Christina Grimmie, or simply go here.
Retrieved from "https://wackypedia.risteq.net/w/index.php?title=Christina_Grimmie&oldid=133643"
Categories: