Christian Hendry is the ultimate ninja-history teacher-spaz-playwright-duck-lying story teller on the planet. He runs around with his "ninja skills" and creates Chuck Norris facts. His ultimate weapon is his straight edge lifestyle, making him smell like powdered eggs on Saturday morning. 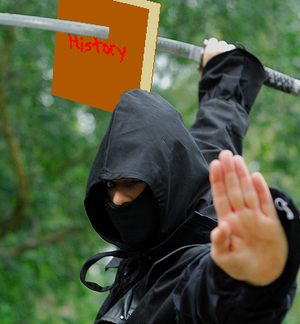 A ninja teacher thing. Aka: Hendry.

Bread is NOT a color[edit]

If you don't believe me then ask Mr. Hendry. He knows all. So go ask him. I DARE you. In fact, I TRIPLE DOG DARE you. Then he will round house kick you. He is such a poser! He is soo obsessed that he will break wind. EWW! I mean who says he threw 98 mph in 10th grade?

Now then he was running and wallah! There was a school and he became dedicated to that of the American cause. Like hamsters and this. He is a teacher and currently lives in Northern Frengland. His ear smells like garlic... but that does not mean he is a duck! Even though he is. While he may be a duck he will refuse to avail to llama lovers. So watch out. Watch out or you will get a history book loged inyou r aortic arch.

LIAR he is one[edit]

He likes to tell stories of his so called "awesomenessville" but they arelame and filthy lies. LIES! One day he will meet his gruesome fate... one day...