From Wackypedia
(Redirected from Chocolate coins)
Jump to: navigation, search

For other kinds of chocolate, see Chocolate (ambiguation) 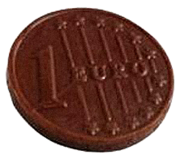 Once upon a time in MEXICO, a man tried to eat a coin.[1] It's true! He was hungry and he skipped a step![2] By the time he realized the difference between the real thing and something FUNGIBLE[3], it was already headed straight south in the direction of his TRACHEA.

Mayday, mayday. We're going down. Pull up. PULL UP!!

It was too late. The man, who by now had his baggy lunch replaced with a coin of unknown value,[4] was on a collision course with FATE. At this point in a man's life, he comes to contemplate several things, such as "What will this do to my ESOPHAGUS, and my STOMACH? My DUODENUM, SMALL INTESTINE, LARGE INTESTINE? And my APPENDIX!?" He soon comes to accept that he will die.[5]

Halfway into chipping his Last Will and Testament into the chocolate coin, he suddenly remembered that the coin he ate was a CHOCOLATE ONE! He must have coughed it up (upon realizing it was an inedible chocolate coin) and started carving his Will in it. But if he knew it was a chocolate coin, why did he think it was inedible?

Relieved, he handed the chocolate coin to the waitress at a high class ice cream parlour. It being both disgusting and non-negotiable, she promptly shot him alive.

HE WAS PARTIALLY INCAPACITATED FOR THE REMAINDER OF THE RUMBLE SEASON.