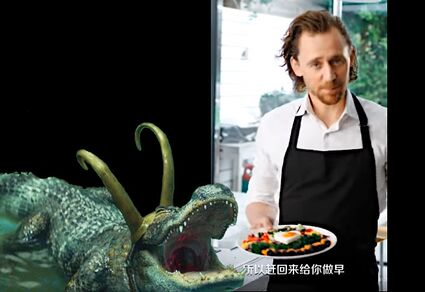 Loki finds out the hard way that Chinese Lokigators are on the Paleo Diet, combining meat with veg.

Loki, the trickster Germano-Nordic god was bored and looking for mortals and immortals outside of Northern Europe and Scandinavia to pwn.

His clever plan was to go to China and and become a television personality. There he approached the government with a plan to continue to keep everybody under their thumb. This was easy since they somehow confused Loki with Thor, since all gringos look alike. Commercials were made starring Loki to flog vitamins on TV that would actually be knockoffs of drugs used in the MK-ULTRA mind control program. China would then have all the happy mindless people it wanted but without their need to eat brains.

However, Loki had another agenda. The drugs/vitamins created by him were really tailored so that every Chinese would develop an unstoppable craving for lutefisk and Wagner operas. Meanwhile, the Chinese government also planned on grabbing the tesseract from Loki so they could time travel and make T. rexes into money-grabbing Commies. However, the government badly understimated the Germano-Nordic PITA. With Loki's great popularity from his commercials, he became a cult figure and then president of the Chinese Communist Party. Loki immediately ordered the intelligence services to brick Thor's phone and laptop. He then went on to pwn the rest of the world by gringling garkle omble ook wequire encile prumtartic arfarf embor fgodd emrkg dkrhhd aorogjtn.