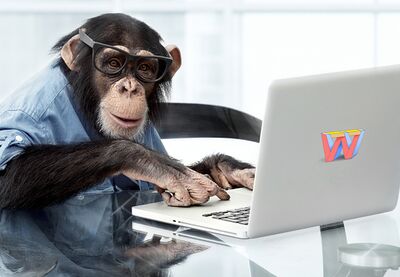 What? You were maybe expecting Hemingway?

A chimpanzee is a small ape that may be humanity's closest related species next to anvils and doorknobs.

With the need for and a tradition of wasting money for no apparent reason, the US Congress appropriated $1.1 trillion in 1983 as part of the "Star Wars" Strategic Defense Initiative. This was to try to prove the Infinite Monkeys Theorem, to study whether it was true that with enough monkeys at enough typewriters, they would produce all the works of Shakespeare and even more. As politicians are unable to tell the difference, chimpanzees were hired for the project.

As expected, the chimps produced nonsense on the typewriters that they didn't try to eat or throw at their human bosses. This was expected, since this happened in human typing pools on a regular basis. By the time chimpanzees were put on computer keyboards, they had produced nothing of note except a few presidential speeches.

Then things changed when an unknown chimpanzee found a copy of Mavis Beacon Teaches Typing and began to use it. This animal and its group soon began to turn out almost intelligible work, certainly considered good enough for government work. Chimps then passed the program on to other chimps who also improved their work greatly. Thus, it was the lack of typing skills more than anything else that prevented chimpanzees from writing anything useful.

Today, chimpanzees provide the bulk of all the written content on the internet including 100% of all wiki content. Let's face it, it doesn't take much. Meanwhile humans are free to absorb content without any creative thought or effort. Nice.