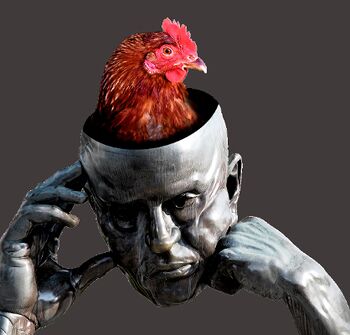 Despite what psychologists and so-called normal people will tell you, the Chicken of Depression is very real and a genuine threat to your fragile and shriveled little brain.

The Chicken of Depression will begin visiting you at night while you are sleeping to work its mysterious chickeny ways upon your tiny gullible mind. You will never know it was there because the Chicken of Depression only wears chicken diapers of the highest quality. Those who wake in the middle of the night should be extremely careful to not see the evil entity. The Tooth Fairy did and was killed in ways too horrific to mention. That is why children's parents leave money for their kids since she is no more.

The depression begins with starting to get out of bed later and later, always continuing to wear pajamas throughout the rest of the day. You might completely lose your appetite except for delivered fast food and handfuls of salt. You will then begin to binge watch shows like Rules of Engagement and actually think they are funny. Soon, you will be constantly tired and disoriented, fooling yourself into thinking you are accomplishing useful things but ending up writing mediocre articles for Wackypedia, for example. Constant crying is not unheard of because of the constant imagined need for chopping onions. This can lead to a life of nihilism or becoming a Goth, meaning you will always wear black pajamas.

Eventually this can lead to attempted sewercide, that is, being run down by a car while trying to open a heavy manhole cover by yourself. Victims of the Chicken of Depression have been known to try to throw themselves out of the windows of their basement apartments, though with little success. You need to recognize these subtle signs and get treatment.

Modern medicine will just load you up on meds to take your money and make you just another member of the zombie nation. It is far better to go see the fortune teller Maleva in her tent pitched just outside the city limits. There she will bitchslap you back to your old self à la John Wayne. It may take regular treatments but the results will be worth it. Just don't become a werewolf in the meantime because she can't do anything about that.