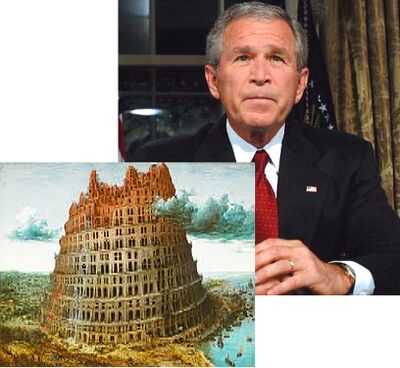 The Tower of Babel, made entirely of cheese and therefore cheesy, and George W. Bush, just plain cheesy.

You would think that cheesy would be a good thing unless you were a vegan or allergic.

But the use of the word as being something badly made or being of poor quality is more common, outside the world of advertising. How did this happen?

It may have been due to the construction of the Great Dam of Marib in Yemen, completely made of cheese. About 750 BCE, this replaced a much smaller earthen dam that did not taste as good. This held for hundred of years, as it was a mysterious type of cheese that mice did not like. It did require many guards to prevent locals from taking chunks to eat. Ever since then, all dams have been made of various types of cheese, with varying results. The Teton Dam in the United States was breached soon after its construction in 1976. Investigation showed that contractors substituted soft Velveeta in some sections, making it weaker than designed. Since then, dams have been made of concrete even though they have been built in places with no water to prevent any chance of their destruction. Meanwhile, half the existing dams in the world have been eaten by mice and rats, which is why we drink nothing but bottled water today.