Charlie the unicorn of the sea

Charlie the Unicorn of the Sea, or Charlie the Narwhal to many, is a mere Narwhal who spends his unvaluable time swimming the waters of the Acrtic, like most Narwhals. 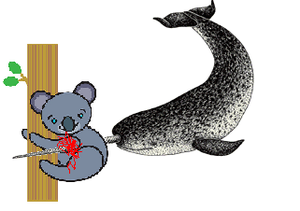 The narwhals had to save the day.

Charlie is just like any Narwhal, except for the fact that he has a name. All of his Narwhal friends are nameless, and a series of neighs and whinnies are used for identification. Wait, that's a lobster!

Charlie also is a male which means he has a dick (Censored for the female audience). He also can swim in the water. He is fat.

One day the Koalas and Polar Bears took over the planet. The Narwhals were not happy about this. So they had to set out to Australia and swim upstream and jump out of the water so that they could impale the koalas using their horn. Then they killed them and the Polar Bears started making Coke commercials and balance was not achieved. But then twenty little ducks robbed a shoe store which started the Ocean-American War which was a war between Israel and Egypt. The Narwhals became practically extinct because of the Egyptians throwing Israelis at them. But Charlie survived as well as a female and they were in the heat and made the narwhal population grow back to it's previous number.

Other than that, Charlie has nothing to show for his life. Wait, he's dead.