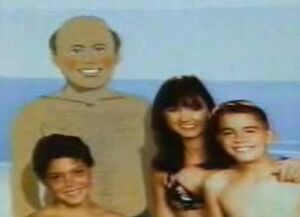 Charlie Brown never got the Red-Haired girl, but he intended to get married and have two sons.

Charlie Brown... AKA Punching Bag, was born on 3/13 sharing the same birthday as Donald Duck.

Many years, he struggled with baseball, flying kites, kicking the football, and drug and alcohol problems which lead to the death of his companion Snoopy and a bird named Woodstock.

After a few years of Rehab, Charlie Brown got married to a well-to-do woman and had two sons named Cleveland and Louis.

He never had contact with his other Peanuts friends since he went to Middle School and took drugs, since his friends were the ones that drove him to Drugs!