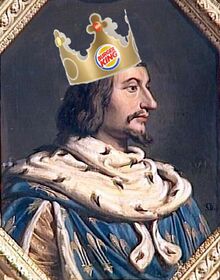 Forced to sell the crown jewels to ransom his father, Charles V improvised.

He was put into the role of regent of France when his father Jean II was captured at the Battle of Sidney Poitiers. Apparently Jean went looking for a public restroom in a bad part of town and was captured by the English. Charles was then put on the spot by enemies of the monarchy and was forced to concede a chunk of France and a huge ransom in the Treaty Of London Derriere (1359) as well as having to release his evil twin, Charles the Bad, from custody.

Charles was able to keep the army intact and out of harms way and let the English army roam freely through the countryside. Since his father Jean had allowed mercenary bands to do the same, French peasants didn't notice a difference in who burned their houses and crops. Charles also held back for a time on raising taxes to pay the huge ransom demand, instead using raffles and bake sales to raise the funds. Knowing the French didn't have the money, the Treaty of Brétigny Spears (1360) reduced the ransom from "nigh impossible" to "ridiculous".

Number Two son Louis of Anjou was swapped out as a hostage in order to bring back Jean II. On his return, Jean managed to be as lousy and hated a ruler as he was previously and decided he was better at being a hostage and left for England. This left Charles in charge but left France in bad shape.

Charles, now with an official V, gave a minor noble, Bertrand du Guesclin, the task of leading the now-hired mercenary companies to support the claim of another Henry, of Castile in Spain. Henrys stuck together in those days. This had the dual purpose of killing off both the English army supporting the opposition and the mercenaries. Charles V then sent armies to take back lands given up in 1360, who were confident in doing so since they were getting paid for a change. The French armies were able to take all lands lost by the treaty and restore Normandy baked goods to France.

His last years were spent obsessed with all things "V". He became an expert shredder on his Gibson Flying Vee guitar and would flash the "V" sign to his subjects. His last act was to remove several major taxes, which of course, only really happens in fairy tales or for the very wealthy.

Of course, this all went down the drain as his son and brothers were not the DIY kind of guy that Charles V was, but more like Three Stooges types. Thus, France is owned today by several Swiss insurance companies and banks.

For those without comedic tastes, the so-called experts at Wikipedia have an article about Charles V, or simply go here.
Retrieved from "https://wackypedia.risteq.net/w/index.php?title=Charles_V_of_France&oldid=142517"
Categories: