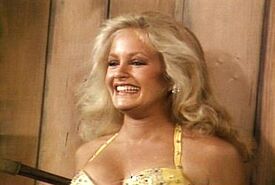 Much to her surprise, Charlene Tilton was always required to take her driver's license photo in a skimpy costume.

Charlene Tilton is an actress best known for her role as Lucy Ewing in the soap opera Dallas.

Dallas had the largest viewership of hetero males for any soap opera, all fantasizing about her and and her assets. While the networks tried to play up the "Who shot J.R." storyline, those male viewers were more concerned about when Lucy would show up in a bikini, how often and whether it would fall off. She would later appear in Circus of the Well-endowed Stars, Dancing with the Busty Stars, Tits on Ice as well as many cameo appearances shot in profile.