ChanServ is the omnipresent, omnipotent, never-seen-before bargain-basement God that Virgin tried to sell in CD form. After years of fruitless schemes, and using all of his infinite cunning and power, ChanServ quickly sprinkled the asleep Virgin shop attendants with tepid Holy Water to distract them while he made his escape. You sometimes get to meet ChanServ when you have a coma but most people find him when they go on the #dating channel on IRC. He's mostly occupied with hacking into the various world missile defence systems but will occasionally pop in at YouTube, in animated form; this was been taken advantage by some fat Japanese kids who tried to convert him into a pokemon. He quickly became MissingNo and broke their games, later escaping under the cover of darkness through the link cable.[1] 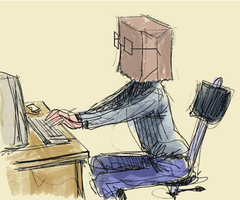 ChanServ had to be more careful after webcams were invented

It is said that he is the ultimate computer geek - the only person ever to come out of ED alive without a whopping great load of viruses, fundamental racism or a hentai wife. It's rumoured that he hacked deep within the Goatse, past the digestive system and into the internet in it's purest form. This particular gateway into the power surge is said to have came about due to the highly corrosive ED boring a hole through the very fabric of the internet itself!
This was when ChanServ ascended the "$T41RW4Y 2 H£4V£N" and found the "4RK 0V TH£ C0V£N4NT".[2] Inside the Ark were the ultimate cheatcodes.[3] These cheat codes are said to date back to the very beginning of time and space; they were created by God so that he may easily fathom bomb locations in minesweeper. Careful not to touch the Ark[4] he slowly lifted the cheats out of the Ark and began to read. Moving his limbs and pressing his nipples in the correct order he destroyed his pants all his ties to the World and became one with the internet. But that wasn't the only cheatcode he used, Oh No. In fact he used quite a lot of them, most of them seedy.

Things That Happend Because Of The Cheat Codes[edit]

I told him not to use that cheat. 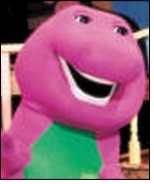 ChanServ in a Barney costume contest

ChanServ can come in many forms, whether it's as his name printed at the top of a chatroom window or as the last remaining stickman in a flash animation he's always there. He's often seen wielding a bucket of water, a Hacksaw (named Haxx0r), an ancient Greek army, and a vaccination needle. The water helps him put out firewalls whilst the hacksaw eliminates all internet boundaries that may cross his path. (However he can't often be arsed to laboriously saw into tough website exteriors, and instead asks politely whether they'll let him in or not). The ancient greek army is to help deter Trojan Horses Trojans by confusing and distracting them with a large quantity of half-dressed homosexual men. Finally, the huge hypodermic needle helps vaccinate him against viruses, and it's where he keeps his medication.

History: A Nerd Is Born[edit]

Not much is known of the boy ChanServ. His parents[5] were smited during Old Testament times and his social workers were all killed suspiciously by natural causes. It is thought by many however that he was the Chosen One, a computer user so adept that he may bring balance to the force. Trained by a seedy green midget in the woods he quickly topped high score tables around the net. Upon completion of his sessions ChanServ emerged from the woods, victorious square-eyed and intolerent to sunlight. Quickly hacking his way into someone's house he found he could channel the power of the interweb to the point of travelling through computers. Sadly, it was 1992 and computers were so bad that public transport was quicker and cheaper than computer aided locomotion. After getting half way to Surrey on the back of a pop-up the computer he was travelling to had to process more than 2KB of data, instantaneously exploding and showering the proud owners with poorly made technology.

Stuck inside the internet he soon realised that despite his lack of excercise he was much faster than everything else[6] on the internet and spent the next few years being chased by Pac-Man and riding the Microsoft Word Paperclip. The years passed and the spam mounted up but ChanServ stood there, waiting for broadband to be invented. After many failed attempts[7] broadband was eventually created and ChanServ found purpose once again. Coming out of sleep mode, ChanServ system restored and rebooted before setting out on his quest. He roamed the net far and wide and google image searched until "Google" actually went blind, but nothing seemed to satisfy him.

History: To Protect and serv, ChanServ[edit]

'Serv's Younger brother had finally lost his baby fingers and grown into his new 1337 digits, meaning that he was able to impart some form of computer literacy unto the parents of the Chan household. After attempting to put the family computer on cruise control and access the internet via Microsoft Paint, the parents finally managed to reach the internet. All though they originally intended to check out the CBeebies webpage they were greeted with their forgotten son.[8]

The family treated this apparition as spam and locked ChanServ in the spam folder. ChanServ wept in despair at his rejection and began to comfort eat[9] God saw his despair and decided to help lowly ChanServ. He nudged Jesus who nudged Allah who poked Buddha who telepathically raped Ganesha who contacted the Computer God. The Computer God got up from his game of IllogiGames:Seppy Blaster in his Microsoft Paint jacuzzi, fetched his tommy gun and went out to save ChanServ. Climbing into his Print-Screened limousine he rode to the rescue. He quickly reached the folder and shot seven shades of spam out of it. A rather fat and infected ChanServ slumbered out. The Computer God, under orders of Genevieve Artadi, anointed ChanServ as a deity[10] and entrusted him with the internet. The whole online network rests on the shoulders of one pixelated scrawny young geek. All hope is lost.