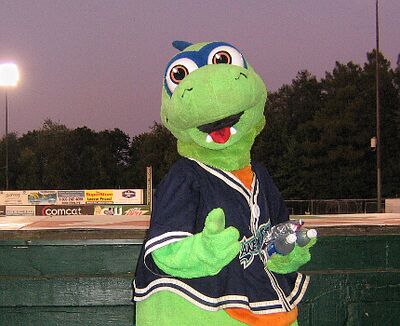 Is this the first real proof of Champ?

Champ or Champy, is the American cousin of the Loch Ness Monster, residing in Lake Champlain that forms the border between New York state and Vermont. It has often been described as looking like a plesiosaur, but so has E.T. and your next-door neighbor.

It gained fame by coming out on the American side in the War of 1812 during the Battle of Lake Erie, prompting Commander Oliver Hazard Perry to create his "Don't give up the monster shit!" slogan. How Champ got there is a matter of controversy since he had to travel the length of the St. Lawrence River under the British guns arrayed along its shores.

Champ has been spotted irregularly over the years, always recorded as a tiny dot on cheap cameras. No attacks have ever been recorded by the monster although Champ has been blamed for some missing picnic coolers and a lost hat. Recent sound recordings have uncovered noises that were dolphin-like with no dolphins existing in the lake. However, this has now been attributed to farts by humans due to the spicy sausages served up by local eateries.