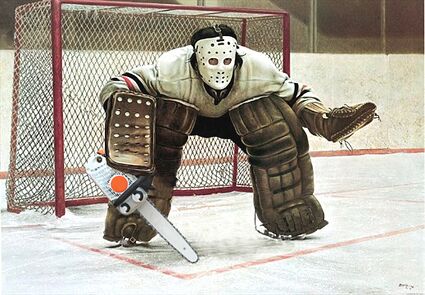 Don't mess with the deacons at this church, I'm telling ya.

So there I was in chainsaw church as usual when I looked over and saw that Phil guy, and he's wearing a suit! Now this is a Texas Reformed congregation and you don't need to dress up like that. Just remember to wear your mask made of human skin and that's enough. So when everyone was staring, Phil pretended he found a loose thread on that suit. That's when he whipped out a brand new Makita 8250 Forestmaster to trim it off! And the dang thing even had autostart; he didn't need to yank a rope or nothing to fire up that sucker. He did take out the Wilsons sitting next to him when he swung that thing around, but I don't think anyone noticed. That thing was really sharp!

Now, they teach us not to covet thy neighbor's chainsaw, but I was pretty impressed by that baby. I admit it made me think unclean thoughts about going to the Ace Hardware right after services and buying one for myself. I could tell a lot of the others were probably thinking along the same lines, so it was gonna be a race to the parking lot when services ended. I admit that I really don't have that kind of money and the chainsaw I have now isn't really that old. But then, the sermon got everyone focused back on the basics, since it was about Ezekiel taking out one of the Devil's minions with a mini. And he did it by taking off three of its legs after doing a shoulder roll and upthrust.

So when we all fired up our chainsaws in unison to sing the Lumberjack Song, it seems Phil was forgotten. Oh, he did try to carve up the pew in front of him, but he got a dirty look from Mrs. Walters and stopped. The little Smithers kid in the chorus did a right nice carved bear for his solo. He's gonna be some talent soon, chasing a lot of people to their doom.

The Reverend did the usual blessing of the chainsaws after all the blue smoke cleared. And I never did think any more about going over to Ace Hardware that day. I just went home, carved off a couple of steaks and sawed the tops off a couple of beers for a nice dinner. I still can't get that salad tossing right with my current chainsaw, but my neighbor Ed Gein says it's all about technique and practice.