“Whatever Lola wants, Lola gets.” 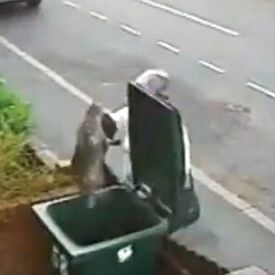 Mary Bale of Coventry, England walked down the street in 2010 and saw a cat. Like any good citizen, she picked up the cat and dropped it into a nearby wheelie bin (American: trash can), flipping the lid shut. Just before she did that, she looked up the street, in the manner of Bluto/John Belushi in the cafeteria scene in Animal House, albeit without the eyebrow thing.

For the owners of the cat (Lola) and the wheelie bin (unnamed as yet), had installed a CCTV camera, as Britain is as close to 1984 as any totalitarian government would hope to be. Posted online, it drew the attention of the vigilante lynch mob of good and evil, 4chan, or at least part of it. The binner was quickly identified and outed, and the tabloids had something for their front page for the day. Bale came up with the brilliant comment 'It's just a cat' but then backtracked when her spin doctors told her play dumb and say 'Dunno'. With death threats and hate mail piling up, she was given police protection. When noticing her police guards all had armoured vests, she asked for one and one was produced with a bullseye upon it.

Now dubbed the Cat Bin Lady, Bale was eventually fined ₤250 plus ₤1000 costs and skipped off into the sunshine. She was later spotted in Cornwall, thought to have been looking for the bigger challenge of stuffing the legendary Beast of Bodmin Moor into a garbage skip. This incident only brought up questions about mob justice by 10-year-olds and why they don't go after major crooks and politicians. And why the world likes to follow no-brainer stories they can understand rather than the complexity of powerful people hiding money in overseas banks. Meanwhile, cats put up their guard: