etymology - me + ouch (oww) as in me about to fuck you up with sharp claws. 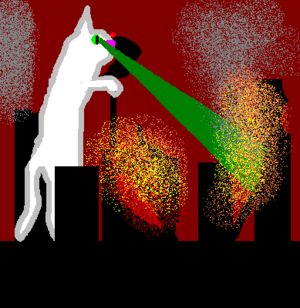 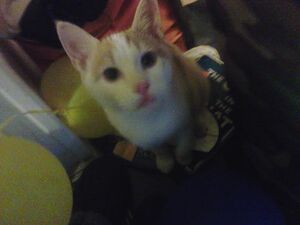 An adult cat is primarily made up of fur, claws and a tail. However, there have been many sightings of cats with abnormal appendages including ice-cream cones, buckets and even (though disputed in some scientific circles) water.

Cats are household pets, often used for the cleaning of gardens. Generally spanning from 200 to 300 feet tall and 150 to 200 feet long from tail to nose, cats are very useful creatures. For example, if you compete in a pickle-growing contest, one can order the cat to fire it's dread eye beams upon your enemy's plants, destroying them and leaving nothing but a scenic smoking crater. As cats are radioactive creatures, they are immune to everything. When used in battle, cats can decimate entire fleets. If a nuclear explosion is to occur, it's a widely-known fact that only cats will survive. Add to the fact the cat CAUSED the nuclear explosion in the first place and you have one evil creature. It is also commonly known that cats always land on al fours. This is because they are

1.) Highly trained in how to do a barrel roll

2.) Exercised daily by ninjas disguised as leprechauns disguised as faries which are invisible. Oh, and they don't actually exsist.

3.) Contain a high-tech hydraulic gyroscopic system powered by the magic in cat food. That's why they eat so much.

Common among Uncyclopedia and ED users. Wackypedian Kitten Huffers are rare. Kitten Huffing said to be invented by Santa Claus.

For those without comedic tastes, the so-called experts at Wikipedia have an article about Cat, or simply go here.