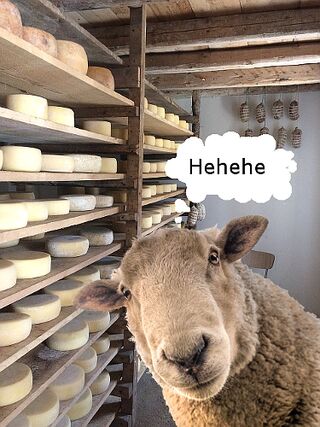 Casu martzu is a cheese that asks the question: how much do you really like cheese? Mind you, they can't really talk to you but might hop up on the table next to you and give you a nudge.

Its known history traces back to the time of the French Republic with Napoleon invading Sardinia with his army (stuck in his pantsy). The general had a hankering for some soft cheese and was given a few wheels of carsu martzu. After cutting them open, he was seen retreating back to his ships, never to be seen again.

This was because casu martzu is a variety of Pecorino cheese, made from sheeps milk. That is left outside so that cheese flies can come along and lay their eggs in it. Those grow into larvae, otherwise known as MAGGOTS, apparently a favorite of US Marine drill instructors. Thousands of them. Maggots, not drill instructors. Those critters soften the cheese and when a wheel is cut open, the happy maggots jump into the air for joy, if not for Adriana or Gina. Eye protection is a must, though cowards will stick the cheese in the fridge to kill the maggots first. However, everyone considers that to be cheating, but it otherwise has the benefit of chasing Indiana Jones out of your house.

Other European countries have similar cheeses but casu martzu is banned by the European Trade Commission as jumping food is somehow not generally approved. Therefore today, all of Sardinia and the massive Mexican jumping bean industry are working hand in hand to get that ruling overturned.