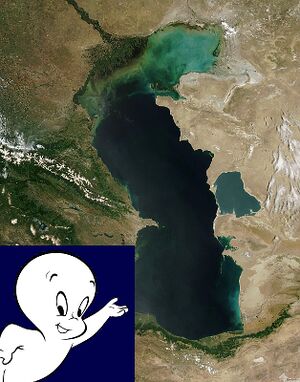 The Caspian Sea today and its explorer and namesake, Prince Caspian of Narnia (inset).

The Caspian Sea is located among the Stans in central Eurasia. So it's nowhere you'd probably want to visit.

It is a sea and not a lake because of spilled salt from cafes located along the Volga River that feeds into it. More importantly, it is a sea because of pirates, both historical and modern. They treasure they seek today is oil, the major product of the region other than pollution. Due to the latter, the famous caviar production of the Caspian Sea has been severely reduced due to the producers, sturgeon, going to work in the oilfields for the relatively higher pay there.

Even though hijacked oil tankers can easily be recognized by the sound of sea chanties and squawking of parrots coming from them, the ships are allowed to pass through the Volga-Don canal and out to Western Europe by paying a bribe to the greatest pirate of them all, Vladimir Putin. Such is the thirst for oil in the West that even oil slicks and greasy piroshkis are welcome there.