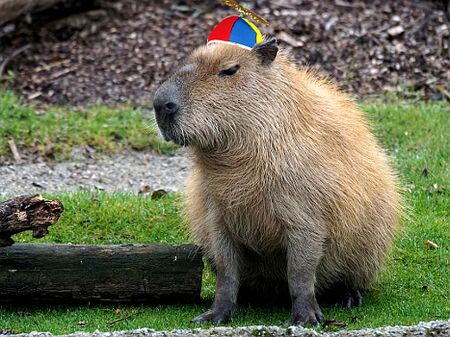 When a man with a .45 meets a capybara with a propeller beanie, the man with a gun is a dead man.

A capybara is rodent like an agouti or coypu only bigger. They may just be disguised Scots Terriers, but scientists are too afraid of them to find out.

They roam the mean streets of northern New Jersey after leaving the turmoil of South America behind. They have completely adapted to their new home, which includes their diet of human flesh. They have a large enough population that they do not feel that they need a gang affiliation or need to wear gang colors. So yes, capybaras are BENNYs (those from Brunswick, Elizabeth, Newark, New York).

Typically outweighing former governor Chris Christie, they are extremely fast for their size and have been nicknamed the Kool Krazed Korean Killers even though none have ever appeared in WWE wrestling or ever been to Korea. They are ambush predators, hiding just under the surface of lakes and rivers or behind Am bushes (duh). They are dangerous to humans like everything else in New Jersey since not only will they eat us, but they will use all the credit cards found on their victims and sell their cars to chop shops. "One strike, one kill" is their motto. Therefore, they would be excellent at playing shooter-type video games if only they had opposable thumbs.

The rodents are very selective in whom they eat. The fatter the human, the better, obviously. But capybaras will avoid people wearing a lot of bling, as the metal parts tend to get stuck in their teeth. This explains why so many Guidos are still running around New Jersey. In a pinch, they will eat pizza like their transit system rat relatives.

Capybaras are one of the few rodents that cook their prey before eating it. This is from sitting around and watching all the shows on the Food Channel and elsewhere. So human foodies can take comfort in the fact that they will not be overseasoned or roasted to overdoneness when captured by capybaras.