Captain Jean-Luc Picard is the head honcho of the USS Enterprise. 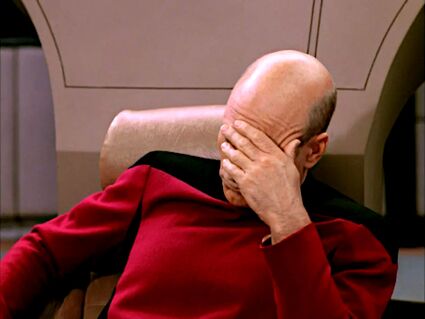 Captain Picard does his best thinking while sitting on the pot.

He is your typical Type A psychopath assigned to death rides in the far reaches of the galaxy. He is just one in a long line of major assholes sent into space to keep them as far away from Earth as possible. Because of the Trekkie Army, he is not allowed to be killed off as his often stupid decisions should cause. His Shakespearean voice is commanding, but that is a necessity since the starship's bridge has such bad acoustics.

Picard's best dumb trick was to get captured by the Borg. While chafing at being just a small cog in a bigger wheel, he was happy that he now measured 12 inches even though it was just a piece of rubber hose. While he was eventually rescued, a wary eye has been kept on him since he still eats a lot of honey and makes buzzing noises.

He is surrounded by a carefully hand-picked group that have their own problems so that they would never mutiny like anyone else would in a heartbeat. For example, Chewbacca Dorothy Commander Worf is always pining for the fjords and is too obsessed with tradition to realize that he could turn pirate by murdering everyone on the bridge. Commander Riker is too busy always looking in the nearest mirror to do any thinking. The android Pinocchio Commander Data is smarter than any other officer but is not programmed for ambition despite being the favorite sex toy of the entire crew. And so it goes.