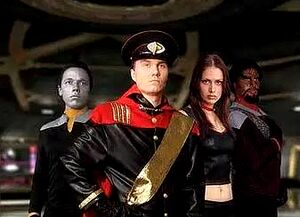 Captain Kirk on the bridge of USS Enterprise.

Did awesome covers of Beatles tunes.

Did serveral commericals on TV.

Saved whales, on more than one occasion.

Gave Kahn a wedgie, more than once.

Beat the crap out out of a green lizard alien.

For those without comedic tastes, the so-called experts at Wikipedia have an article about Captain Kirk, or simply go here.

Let's face it, Captain Kirk is a million times cool, than you and I can ever hope to be.