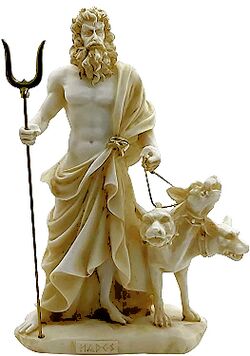 See? The Cap of Invisibility is invisible.

The Cap of Invisibility is mentioned often in Greek mythology. It makes its wearer invisible (duh), allowing him or her to do tasks secretly and make an ironic fashion statement at the same time.

The cap was owned by Hades, the god of the underworld. He used it to help defeat the earlier gods, the Titans who are now just hanging around in Tennessee. Since Hades was not a hat kind of guy, he just left it on the Hatrack of the Underworld next to the Helmet of All-Night Erections and the Hipster Fedora of Death. And there it sat for some time.

However, word got around and the cap would be "borrowed" by others many times. Hermes, god of flower delivery, was forced to fight the giant Hippolytus and wore the cap to defeat and kill his clueless rival. Athena borrowed it help Diomedes in order to avoid nagging from Ares, the god of war, among other occasions. Perseus famously borrowed the Cap of Invisibility and other magical stuff in order to kill Medusa – he used it to escape vengeful pursuers and to dodge payment at toll booths. The power user was Zeus who would use it to escape clingy one night stands and vengeful husbands. Unfortunately, he left it behind in a sleazy motel one night and it has been lost forever.