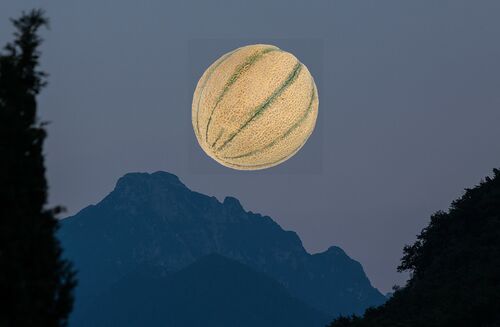 "Why have you called me out at this time of night and what does this have to do with my son?," demanded Sir John Talbot.

The gypsy Romani fortune teller Maleva spoke bluntly. "Your son, Larry, was attacked and bitten by a twee pop band I manage, Belle and Sebastian. They had gotten out in search of Irn-Bru, because they are Scots. Normally, nothing would happen, but tonight is the night when the full moon rises and looks like a cantaloupe. It is foretold that:

Maleva pointed to the sky. "You are skeptical, of course. But will you believe your own eyes? Look!!"

Sir John was astounded that the Moon indeed looked like a cantaloupe as it rose over the crags. "Now what's this about a little Scots hamster?"

Maleva slowly shook her head and said, "Hardly a little creature. When the cantaloupe moon is full, Larry Talbot will become the werehamster! A killer!"

Just then, he heard the horses become tremendously agitated as all heard the sound of a giant squeaking hamster wheel turning not far away.