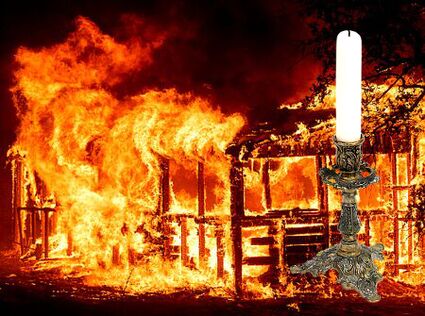 I was looking for the candlestick matching this one. I left it somewhere. I just don't remember where.

A candlestick may be an unfamiliar thing to you. Wait, you don't even know what a candle is?

Pre-electricity and post-tiki torches, candlesticks were always found in the home or business. You would stick what was called a candle in it (for you non-Catholics) and light the candle so you could spend the night squinting at whatever you were trying to see. These devices would be used so you didn't have to hold the candle yourself and getting your hand encased in hot melting wax and turning yourself into a dancing candlestick screaming owowow. Jews, being big readers, invented the menorah that held 7 candles, enabling them to read books and also enabling people of other religions to pinpoint their households to burn down. Of course, Jews just got the idea from the Kinara used during Kwanzaa that also brightly showed the way to black households for torching.

So every household used to have lots of these. With Alexander Graham Cracker inventing electricity, these were rendered completely useless except for over-the-top birthday cakes for Madonna or your standard rapper. Sometimes they are used as household decorations, making them a useful murder weapon as popularized in the game Clue/Cluedo.

The candelabra is any holder for many candles. This was popularized by pianist Liberace, where no home would be considered complete without a grand piano with a candelabra on top. Oldsters may remember him throwing lit candelabras to his fans along with souvenir cans of kerosene. This fashionable trend ended when Elton John invented the glow-in-the-dark piano.